Top of 6 Universities are the same of previous year with not so much difference in rankings.
It is only the University of Cambridge that ranked up this year replacing California Institute of technology who ranked down to 3rd place this year.

If we focus on Asian, many Universities are showing strong performance and improvement this year such as Singapore and China, Hong Kong.

What is The Times Higher Education World University Rankings?

Times Higher Education is a weekly magazine based in London reporting specifically on news and issues related to higher education.

From 2004 to 2009, the university rankings were created in partnership with the UK University evaluation institution,the Quacquarelli Symonds (QS).
They stop working with QS and signed with Thomson Reuters in 2010 due to criticism of aggregation method .
They use Thomson Reuters’ Web of Science (WoS) Citation database today.

From 2004 they reported a ranking not only on general education, but also another ranking based on specific field such as Social Science, Medical Science, Natural Science, Engineering and Information Engineering and Humanities Science. They published the top 50 universities based on this.

In September of 2011, Times Higher Education issued a statement that their 2011-2012 list based on their research and teaching called World Reputation Rankings.
They also announced rankings for the top 200 universities.

How does Times Higher Education made the rankings?

These 13 indicators are grouped into 5 different groups.

Performance Indicators and Percentage of each in Ranking System 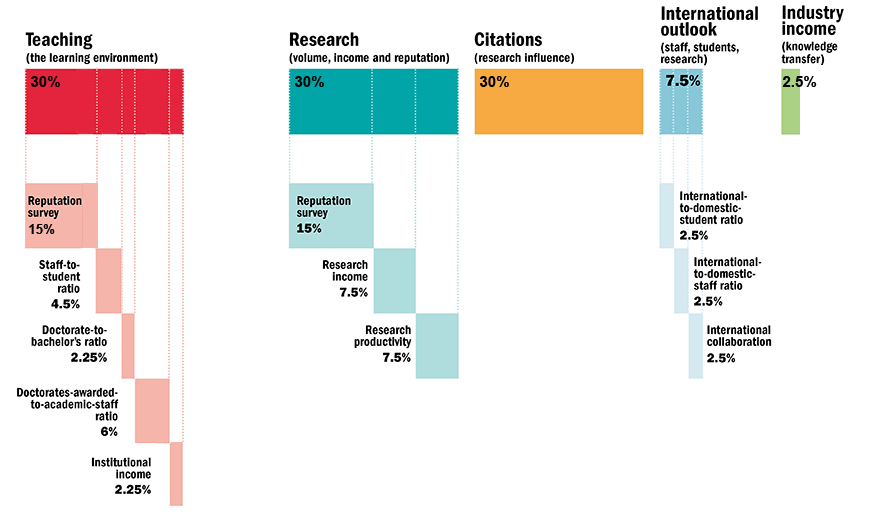 There is an undeniably increase in the performances of the Asian Universities with the recent Times Higher Education World University Rankings 2018.

This is the first time that three Asian universities hold a spot in the top 30 of the ranking since 2010‑11.
These are Singapore, China and Hong Kong.

Another noticeable rise is from China. They now have two universities in the top 30,
the Peking University and Tsinghua University .
These two Chinese institutions rose above other known institutions in Europe and US.

Also, according to the report from Times Higher Education,
almost all Chinese Universities have shown great performances,
which means that the country has a strong commitment to increasing education standard.

The University of Hong Kong is one of Asia’s biggest risers this year, jumping 18 places to 58th.
The report showed that this is due to its large boost in its reputation for research and teaching improvements, citation and industry income.

What is the relation of rankings to the rise of Asian Countries?

We all have the results now.
When we look closely, we can see some universities are ranking down and some are ranking up, especially those from Asian Countries.

While many are rising, we can also see the down rising of many universities of United Kingdom and United States.
Though, UK holds two institutions on top, we cannot ignore the fact that other British Institution slide down with rankings.
Overall, half of the UK’s top 200 universities have dropped places.

The same thing happened with United States.
Most of the American institutions that are sliding down in rankings are those from public institutions.

On the other hand, the rise of Asian countries such as Singapore and China is mainly due to their increasing research and development investments to deal with global high education standards.

Their awareness to the importance of research and raising high education helped these countries to rank up and become known in these international Higher Education rankings.

Around the world, Asian countries are now becoming capable and keeping up their improving standards to compete with the many European countries.

This may be due to their stronger economy so they can now provide more funds to improve their facilities, improve research, and hire top academic staff to be part of their institution.

As a result, many Asian countries are now ranking up and the higher education becomes better than before.

Looking for Enrichment Class for your Child?
Try our Unique Programme!
Inquiry Form